E-Earphone, the damn place that is the heaven spot for many audio enthusiasts overseas. A person going to Japan once cannot miss this place if they are into the portable audio scene.
As much as I want to detail about the store, I would have to leave it for another day. After all, this is Impression Archive - Section where I dump a lot of my quick, dirty impressions, some might have a recommendation rating, some not and will be revisited one day if I managed to have more ear time.

Before going into the post, if you are new, please read this before having any comments regarding my writing or point of view‌.‌‌

Just so you know if you ask about the lack of graph. Due to the store policy about measurements, I am only allowed to measure IEMs in the second-hand department (I think?). For some reasons, the story is different in the demo section.

Click the button below to join my Discord server if you have any question regarding my review or just want some banters:

Some have probably heard about SeeAudio, though for those who aren't: This is a new kid on the block, consists of multiple engineers from other companies in the Chifi Industry. From what I see, they seem to know what they are doing.

And here goes, the SeeAudio Anou. The Yume equivalent for some certain market and at the same time, is not either.
Yes, there are two Anous existed in this world, one is for the Hong Kong market, which is just a Yume but with a different shell. And this one for the Japan market: 3 Balanced Armatures, a different tuning, a different shell... Completely different from the Yume which spot a hybrid setup and a tuning that was "based from Harman". And it's not bad either

The Anou JP signature seems to tilt towards the warmer side, it's a pleasant sound presentation that unexpectedly has its own "Japanese" dash to it. This is not the tuning that I prefer, but I can see why even the engineering team themselves prefer it over the Yume.

That said, what bottlenecks this IEM falls in the technicalities. The Anou sounds a bit blunted and grainy, not to mention the bass response which lacks slam despite the hint of boosts. What it at least managed to do though, was that the IEM did manage to go past the surface detail level a bit, saving the IEM from having a presentation that is horrendously bland like a lot of the sub 100$ IEM that I have gone through.

I probably won't buy this IEM just for the sake of reviewing it unless someone sponsor me -_-, but, it's interesting to see how SeeAudio is showing themselves here while they are still a young company. Whether if they can go far or not, we shall see.

If one mentioning Campfire Audio then the topic of the Andromeda is unavoidable by now. Put aside the fact that there are more than 10 iterations of this IEM, the only Andromeda version that I have ever listened was the 2019 one. And to be blunt, it's an IEM where I can only put respect into but not really the type of signature that I would dig for.

But in short: I enjoyed the Andromeda 2020 version than the previous one. It has all of the good of the 2019's, plus with the fact that the midrange of the IEM is now a bit more forward, giving a presentation that is easier to dig in for a weeb head that usually listens to female vocals like me.

Sadly, even with that, I still don't feel like there is any reason that I would actually like this IEM. The change in the midrange is welcoming for sure... but, it's still not enough, not to mention how warm the IEM is.

I doubt this is going to change though, but it is nice that I find myself appreciating the change that Campfire Audio is making this time around. Hopefully, future models can be based on this one if there are any.

I have a mixed feeling about the Ara, mostly due to the contrast that it is portraying in its sound presentation.

Tuning wise, it's average. Whatever instruments that I managed to throw into the Ara, there will be always some sense of uneasiness in my head due to how off the tonality of the instruments are. With female vocals, it is even worse since the Ara basically sucks out all of the energy from the upper harmonics, giving me a narrow presentation that I am not fond of.

But arara, the technicality performance of the Ara is good, or if you want me to go all out: It's excellent. Imaging is pin-point, transients are sharp and coherency? Well implemented for a Multi-BA IEM. This came to me as a surprise as I find myself not hating the Ara that much, and in some instances... actually enjoying it.

A weird submission from Campfire Audio. Hence, I am quite eager to ask one to check it out just because of pure curiosity. Guess that's why one can consider it to be "unique" after all.

I realized among the IER series, the M9 is the only one that I haven't got the chance to listen back in the day and since I have came to Japan. I have been secretly spending days listening to it whenever I got to the store.

And damn, the M9 is boring. Like, really really boring. It's reminds me of the IER-M7 where I had the same expression. Giving myself listening for this IEM for days  now and I cannot remove the idea that the IER-M9 is just plainly... boring.

That said, the IER-M9 might be one of the most excellent IEM that I can bring myself recommending to due to its technicalities. The imaging is top-class, resolution is on the top end of the list with great timbre. What great that I found out after hours of listening though, was that the bass response of the IER-M9 is quite good for a multi BA IEM: Tight and fast and do have some slam. Of course, it's not as good as a well implemented DD, but still worth to mention.

I might make an in-depth review of the IEM in the future, but for now, I am positive on the IER-M9. There might be more to this IEM behind its "boring" shell, and I am rooting for it.

Ahh, the Illumination, which is the most expensive offering from Moondrop for their 1DD lineup, I have been eyeing on this IEM for a while, though only now that I have the time to try this IEM.

That said, when the Illumination comes into my ears, I can't help but feel a bit... unsatisfying. Don't get me wrong, at least in my book, it's a decent IEM. But still, I spend myself tip rolling or switching sources just to find any small tweaks that can make me ended up enjoying the Illumination or not... And to be frank, I give up for now.

There might be some element at plays here: Maybe this unit might have some variance issues, maybe my ear just got tired from listening to a bunch of IEM before that...
But all of the reasons I can somewhat come up as an "excuse", there is one thing I am quite sure about the Illumination though: It's smooth.

Hence, it would be the reason why one would go for this IEM, yet, some others yearning for a technical listen might stay away from it. Transient wise, The Illumination is a bit rounded up, attack is a bit blunted. It's not the most technical IEM I have heard, even in the range of DD, I would not call it as such either: might fall behind the recently reviewed Acoustune HS1300SS were if I am going to point out as an example from my auditory memory.

This is all I can say for now. I listened to this IEM by the end of the day so my ears (and by extension, my mental energy) were painfully fatigued by then. That's why the story of whether the Illumination managed to shine brightly or not...

Will be saved for another day. 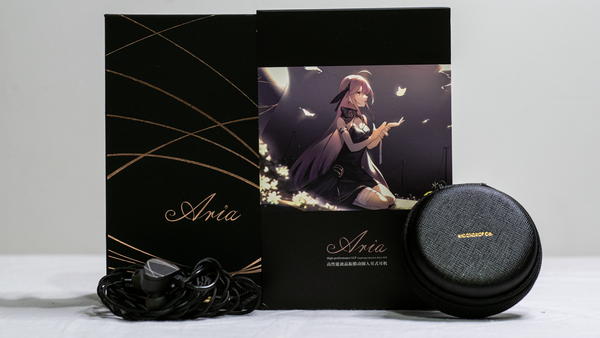