Been a while since I wrote a review

But hey, I am back! After a certain useful bot project at the beginning of last "2" months, I am back to clear my log and catch up on the current audiophile scenes. It's not like I am completely out of touch anyway but I digress.

I will skip the introduction of Symphonium since there isn't much to say. But just know that Hobby Lounge already has a review on the Symphonium Helios where I have held it in high regard and dubbed it as a "Kilobucks treble contender" due to my fondness of its treble representation.

The Triton, (which apparently pronounced as "ton" and not "tân" like my Vietnamese brain imagines it to be) is what we are bringing to the table today.
My initial reaction to this release isn't much, though I did guess it would be similar to the Helios to some extent. Guess there is one way to find out.

💡
Before going into the post, if you are new, please read this before having any comments regarding my writing or point of view‌.
🗨️
Click the button below to join my Discord server if you have any questions regarding my review or just want some banters:

And yes, since The Graph Heritage has released, I will shamelessly promote this project.

I am reusing the content of my Symphonium Helios review for a good reason. The Triton packaging is nearly the same as the Helios down with the build quality. I think the only difference is the treble. I remember Symphonium does select the specific cable for their IEM but I will gloss over that. Just know that the comfort of both is the same.

Due to similar shape the same design, the review will again mainly based on the AZLA SednaEarfit and the Acoustune AET07

The Symphonium Triton sounds signature can be described as neutral. And if I am being specific: Neutral warm. It's an inoffensive and pleasing IEM while remaining quite technical for the price.

With pricing accounted for, the Symphonium Triton is "reasonable" to say the least. It will not rival some of the recent contenders in the block if you are solely counting on its technical performance, but it's not average either. Not to mention, the Triton is one of those few "Good" IEMs that does fit the bill of "tonally pleasing" in my opinion.

The staging (and soundstage) performance of the Triton is average at best. My first experience with the Triton does get a bit jarring due to this aspect coming from someone who daily drives the Sony IER-Z1R. And remains the same even when I use this IEM for several weeks exclusively while alternating between other IEMs I am reviewing. That said, I am willing to give a pass for the Triton's plasticky timbre presentation knowing how it performs against other IEMs in the price range and its detail retrieval falls into the better part of the market.

Again, I think it is reasonably priced for a reason.

What I think the Triton has done well here is its tuning. Of course, if you consider my preference, I would love the Triton to be a bit more "shouty" since I am used to a thinner presentation, especially with female vocals. Even for someone who uses the IER-Z1R, the Triton midrange boost still gives me that compressed/recessed feeling when it comes to some Vocal/Pop yet doesn't stay far from being "unnatural" to my ears.

Hence, I can still describe the Helios as engaging and has that grand sensation especially when it comes to me enjoying some of my Ballad/Rock/J-Pop fusion songs. Symphonium seems to have kept this IEM warm enough while giving this IEM some airiness for this to happen. Its treble at least has better extension than a lot of other IEMs in the grand schemes and remains quite snappy. I can detect some peaks in the mid-treble region (5kHz to 9kHz) but it's far from being sibilance to my ears - your mileage may vary.

Finally, my last criticism of the Triton is in its bass performance: It's not bad per se and leans into the neutral side of things. Quick, and does get rumbly when the song calls for it, but I would love to have a bit more punch if I am listening to something like House for example. It's probably nearly perfect for enjoying these types of songs when I am in the mood for it T_T. Still, a feast to listen to for me.

To be frank, genre like House is a really low bar to pass for me personally since I only mostly listen to Diverse System's AD:HOUSE series when it comes to this, so I am being quite lenient here.

Actually, listen to AD:HOUSE 9 and consider buy the album as well, I love this album

"You don't just shill this album just because ARForest suddenly made a collaboration with nayuta and you are just way too down bad with both of them right?"
"Shut up"

That's about it for the Triton I guess. An IEM where I don't find it necessarily impressive but saying it is "average" is quite extreme in my opinion.
It's good.

I don't bring the Sony IER-M9 in this comparison for a good reason, the M7 seems to be a fairer comparison here and is the first IEM that came up into my head the more I think about it due to my attitude towards both IEMs.

That's about it for the Triton I guess. An IEM where I don't find it necessarily impressive but saying it is "average" is quite extreme in my opinion.
It's good.

Yes, the pricing does get a bit jarring, the IER-M7 is around 800USD when it was released and the Triton is 100USD more than this. This is not mentioning the IER-M7 has long since its release and going for a second-hand deal with the IER series is... not a bad choice (It's Sony after all...). That said, I would reserve this comparison for someone who wants to consider a new purchase rather than an upgrade. Again, I held both of these IEMs in the same attitude, despite their sound presentation being a bit different from each other.

I mean... The M7 is warmer than the Triton, but the slight mid-bass boost over the Triton turns out didn't do much for me when it comes to genres like House - The M7 just lacks some "slam" in the sub-bass region that I seem to be quite fond of. However, both of these IEMs has different presentation when it comes to treble. The Triton seems to have more focus in the mid-treble area and has a quicker decay, compared to the M7 which is slightly more focused in the upper treble. This gives the M7 some more "shimmering", it also has a longer decay in transient. That said, I don't think both presentations are better than each other in any way but knowing how IEMs tend to behave in this range - you should consider the fit of both before deciding.

Take the Triton, raise the treble, and reduce the lower mids. The result is a dryer signature, yet way more clarity. Seeing the similar design you would think the Helios is the proper upgrade to the Triton but what I said above is one of the biggest caveats that prevent me to say so.

Read: Proper upgrade, I will explain this down below

Now I would still hold the Helios in high regard since I still tastefully enjoy its treble performance to this day. The Helios overall is just more energetic, detailed, and arguably more technical compared to the Triton though I don't see any change when it comes to staging/imaging performance. I enjoy that the Helios upper midrange lift also makes the IEM less compressed compared to the Triton overall. This presentation contrast is quite significant despite upon analyzing the graph, what they did was relatively few. Which, you can consider this as "less is more" but I digress.

Hence, I don't really want to say the Helios is an upgrade of the Triton if I am following the route of: "Similar tonality" presentation at all, maybe you would appreciate it if you are yearning for more technical performance and willing to ignore all of the tonal contrast between both.

A more appropriate "consideration" that I might agree with as an upgrade of the Triton is the Unique Melody MEST MKI/II.

This would be a really short comparison because there isn't much to say here. Take what I said about the Helios vs Mest MKII in my previous review and compare it to Helios vs Triton, you might have some deja vu moment.

There is only a little to breakdown here so I will make this brief:

There are a few caveats for sure:

For something that was initially considered an "entry" product that lead to the Helios, the Triton surprisingly is good yet different despite having the same shell. Not that I complain though.

With how the current market is priced right now, best I can only say that it is a solid option for people who just don't know what to get. While this does indicate something like the IER-M7 dilemma creeping in, I honestly don't think so considering how different the Helios is to the Triton.

Solid product, with decent pricing. Not the best of all but surely competitive, I don't ask for more.

I am testing some new stuff with how I make my review with the ending note. Hopefully we might have something nice overtime 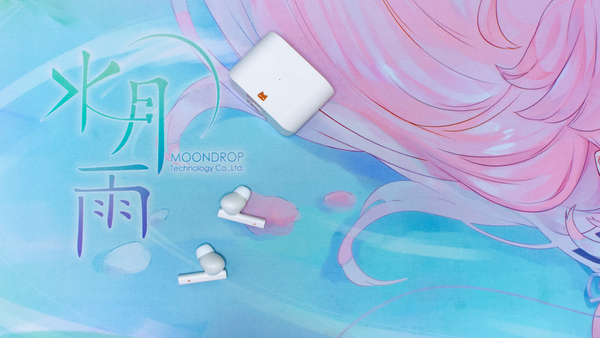 Take a bite into the Cat Cake, and see how Moondrop latest TWS performs.